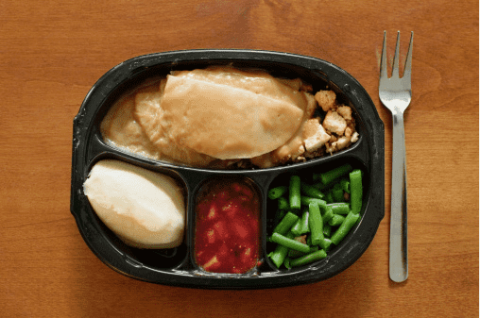 Frozen dinners are quick & easy to make on those nights when you get home late from work and are exhausted, or when your family's schedules are hectic and you just don't have time to cook. So why don't more people take advantage of frozen meals? Why do they get such a bad rep anyway? Not only are they simple to prepare but they can be nutritious AND delicious.

Frozen dinners have long been derided for being full of artificial preservatives and sodium. For many years, the major frozen food manufacturers have heavily processed their foods with extra salts and fats to overcome the taste and texture issues that are created by the nitrogen freezing process. Of course not all frozen foods are created equally, and some of these manufacturers are attempting to overcome these issues as more and more brands are focusing on healthy, natural ingredients (as we've always done), lowering sodium, offering gluten-free meals (as we already do) and more. Chosen carefully, frozen meals can ABSOLUTELY be a part of a healthy diet.

Another reason frozen dinners get viewed negatively is the number of calories and fat in some of them. What people often DON'T realize, however, is that many of these frozen meals aren't intended to serve only one but TWO (and sometimes more) people. Obviously, if you see a Hungry Man meal you know what you're getting, but if you're eating a pasta dish, like fettuccine that's labeled “signature classic” or something similar, you may not realize it's meant for more than one and that you're eating 630 calories. But there are dozens upon dozens of frozen dinners out there (ahem, like OURS), that are clearly labeled with serving sizes and nutrition info. Not to mention the fact that frozen meals have undergone a healthy renaissance in recent years, in general.

While it may not apply to ALL frozen food, it's safe to say that some frozen meals of today aren't the frozen meals of the 1950s. No TV trays, no heaps of sugar and salt, less preservatives, etc. Frozen dinners such as ours, are attempting to shed that bad rep and make your life much less complicated.

Top Chef Meals individually prepares affordable, restaurant quality meals, hand-plated by our own chefs and delivered throughout the East Coast. Our healthy and delicious meals provide a perfect nutritional balance and are perfectly suited for those on a budget. Visit our site today to view our regular meals, diet meals, Paleo meals, gluten-free meals and more!