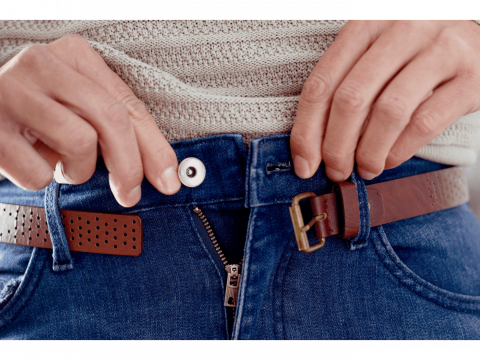 Reasons You’re Gaining Weight & How to Combat Them

Did you know? Approximately 93.3 million of US adults suffer from obesity. Not only that but the estimated annual medical cost of obesity in the United States was $147 billion in 2008; the medical cost for people who have obesity was $1,429 higher than those of normal weight. And that’s not even mentioning the physical cost. Being overweight or obese can cause issues from your wealth to your health, but what’s making you gain weight in the first place? Is there anything you can do to combat it?

You may be doing everything right - eating correctly, exercising regularly - but still you gain weight. Why is that? One factor is likely genetics. Research has shown that obesity has a strong genetic component. Children of overweight parents have a higher chance of also being overweight. While genetics can be an important factor in how you gain weight, it doesn’t mean that obesity is some predetermined outcome regardless of what you do. There are several more factors that come into play.

The likeliest culprit of obesity is how you eat. Let’s face it - in today’s day & age diets tend towards the unhealthy side. Heavily processed junk foods are readily available and easy to prepare, but they’re little more than refined ingredients mixed with additives + a whole bunch of calories. These kinds of foods are designed for a long shelf life and to be easy on the wallet. Plus, they usually taste DELICIOUS so they promote overeating. And what happens when you go out to eat instead of cooking? You’re looking out of size portions and meals that have nary a fruit or veggie in sight. In fact, portion control is a large factor of weight gain. Equally as negative as eating too large portions though is skipping meals. Doing this leads to a slower metabolism and 9 out of 10 times that you skip a meal, you’ll overeat at the next one. So what and how you eat is one of the biggest factors to how much you weigh.

One surprising factor to weight gain is medications. Yep, some of the medication you’re taking could be having this adverse side effect. Antidepressants in particular have been found to cause weight gain because they decrease metabolism and change hormone levels in the body. Other culprits are out there including certain anti-psychotics and diabetes medication.

Not so surprisingly, television, the internet, and social media also factor into weight gain. It’s not just the fact that people spend hours sitting in front of the TV and the computer instead of getting up and exercising or have a propensity to snack while their doing so. It’s also the fact that junk food producers are aggressive marketers. Think about it - how many times during your fave show do you see ads for chain restaurants, fast food joints, potato chips, sugary cereal, etc? It’s a lot. And these marketers can participate in dubious methods such as marketing their foods as healthy products when they’re really not, as well as targeting children in many ads. Children in the modern world are more prone to becoming overweight and/or addicted to junk food than in the past. Hmmm, we wonder why?

And, finally, the other big factor with weight gain is stress. When you get stressed out, cortisol is released into your system. So? This hormone is responsible for accumulation of fat around the abdomen, a type of fat that’s hard for the body to get rid of (amongst other things such as the release of sugar into the blood stream for quick energy & suppression of the immune system). And one side effect of stress can be sleepless nights which affects the appetite center in the brain. Ever noticed that after a night of little sleep, you tend to eat more the next day?

As you can see there are plenty of factors that play into whether you will gain weight or not in life - some of which you can control, some (such as genetics) of which you can’t. Focusing on what you can control will help immensely however. The biggest change you can make is in how you eat. Instead of eating processed, sugary foods, concentrate on fruits, veggies, lean protein, and whole grains. Instead of sitting down at your computer or television for hours at a time, work up a sweat or even take a 15-minute break every hours to get up and walk around. When it comes to medications you’re taking, if you find you’re on one that lends itself to weight gain, find out if there is a suitable replacement. If not, do NOT just stop taking your medication - your overall health is most important - but make changes elsewhere such as your diet. Fight stress with meditation, daily walks, talking to friends or a therapist, and try to get plenty of sleep each night. Gaining weight isn’t caused by a lack of willpower, it’s a result of a variety of factors working in tangent and it’s something that you can control to an extent.

When it comes to eating healthy, Top Chef Meals can help. Our meals contain plenty of lean protein and veggies, are low in calories, and are easy to make. Check out our menu to find the perfect meals for you!