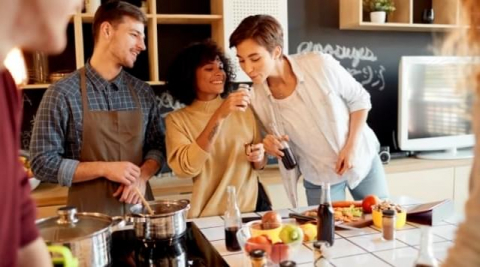 Okay, even WE can admit that the idea of eating crickets seems a bit…gross. But there is currently a burgeoning edible insect industry - one that involves lots of insects, but most notably crickets. We’re talking cricket-based pastas, protein bars, chips, and more (and there’s good reason for that). Before you nix the idea of cricket-based foods altogether, have a look at the details.

The first thing to remember is insects are eaten worldwide and have been for ages. Second thing one should remember is that there are lots of things we eat now that used to be considered really gross - lobster was fed to prisoners in Maine as punishment and in the 70s, Americans wouldn’t dare to eat sushi because it was raw fish. The way we eat is perpetually changing, so try to keep an open mind. But, seriously, WHY crickets?

For starters, eating insects has not only health benefits but ecological ones. Consuming products made with insects such as crickets is one way to contribute to the planet’s health. The world’s population continues to grow each day and with it an increase in food demand. One of the demands to be met is protein. Raising cows, pigs, and chickens in ever growing amounts leads us to an increase in greenhouse gas emissions, deforestation, and the degradation of our environment. Plus, raising more meat is just plain expensive. Insects are a viable protein alternative. Raising crickets en masse requires less water, food, and space, and sees a decrease in greenhouse gas emissions.

And the health benefits? Though it may sound unbelievable, crickets are cleaner than their cow & chicken counterparts - they carry less diseases and risk of infection. Insects are also a good source of fiber, fatty acids, and most importantly, protein. They also provide prebiotics and can be good for people who are eating gluten-free or on the paleo diet.

It’s a bit bold to assume one can just throw out their meat products and start in with the chocolate-covered crickets. We suggest starting first with cricket powder. Cricket powder makes up 60% of the edible cricket business and is simply a powder that you can add to baked goods and soups. You can’t taste it, but you’ll still be getting the health benefits. Two tablespoons of it contains SEVEN grams of protein! Cricket powder is also the basis for a lot of cricket products on the market.

The thought of consuming any kind of insect can definitely give one the heebie-jeebies, but that area of food tech is growing. With the benefit of being good for you AND the environment it’s easy to see why. Learn more about the edible insect area for yourself and give it a try. You might just be surprised.