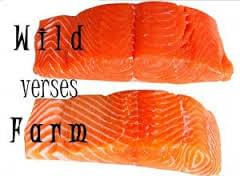 Most health and nutrition experts agree that Americans should increase their consumption of fish. Fish are high in protein and low in calories, cholesterol and saturated fat. Some varieties also are excellent sources of omega-3 fatty acids, which have been found to decrease the risk of heart disease and stroke. Because of these health benefits, the Dietary Guidelines for Americans 2015 recommended that adults eat 8 ounces of fish a week. Americans currently eat only half that amount. But which is better – farmed or wild fish?

Experts have raised concerns about farm-raised fish, which in some cases are raised on unnatural diets and crammed into small enclosures that can breed disease, prompting aquaculture operators to rely heavily on antibiotics. Many assume that wild-caught fish must be a lot better for you because it's more "natural." But is this necessarily the case? Wild-caught fish were once considered healthy, but over the past several decades, concerns have arisen about the effects heavy metal contaminants (such as mercury), pollutants (such as polychlorinated biphenyls, PCBs), pesticides, fertilizers and even trash have on the safety of water and fish. The demand for certain types of fish and some fishing practices, such as bottom trolling, have taken their toll on the environment and the availability of fish. And what about environmental issues, food safety, sustainability, and cost? With this many factors to consider, it's impossible to make a blanket recommendation. Choosing between wild-caught and farm-raised fish depends on what kind of fish you're buying, as well as where and how it is fished (or farmed).

The nutritional differences between wild and farmed fish are not as great as you might imagine. Farmed and wild-caught rainbow trout, for example, are almost identical in terms of calories, protein, and most nutrients. Some minor differences: Wild-caught trout have more calcium and iron. Farmed-raised trout have more vitamin A and selenium. But for the most part, they are nutritionally equivalent.

One of the main reasons we eat fish, of course, is that they are a uniquely potent source for long-chain omega-3 fatty acids. Here is where farmed fish often have the advantage. A few of the farmed varieties that are produced responsibly are relatively high in omega 3 fatty acids.

What about contaminants? In 2004, a study found the levels of PCBs, a potentially carcinogenic chemical, to be ten times higher in farmed fish than in wild-caught fish. That sounds pretty scary, but the amount of PCBs in the farmed fish was still less than 2% of the amount that would be considered dangerous. The differences may also have been exaggerated. Subsequent studies found PCB levels in farmed fish to be similar to those of wild fish. The other contaminant that most people worry about with fish is mercury. The fish that present the biggest concern there (swordfish, king mackerel. tilefish, shark, and tuna) are all wild-caught. The most common farm-raised fish (catfish, tilapia, and salmon) all have low or very low mercury levels.

Finally, there are concerns about environmental impact and sustainability. However, these are just as likely to apply to wild as to farmed fish. Wild-caught fish are sometimes harvested using practices that do a lot of collateral damage to the ecosystem and other fish. Fish-farming practices, in the other hand, can pollute the water and threaten local flora and fauna. Once again, it depends a lot on who is doing the fishing and/or farming. Although modern-day fish farming is designed to address safety concerns, it also has drawbacks. Some pens built in open water can be at the expense of the surrounding ecosystems, such as coastlines, underwater reefs, trees and swamps, and the wildlife that depend on them. Fish that are raised in areas where they're not normally found may escape and breed or compete with local fish — resulting in decreases in the wild species. Fish farms — including those in contained reservoirs — create enormous quantities of organic waste that can contaminate water in the surrounding environment if not handled properly.

There are a lot of factors to consider when it comes to wild-caught or farm-raised fish, but consider this – if you say that you'll never eat one or the other, it automatically removes 50 percent of the U.S. seafood supply from your choices. Your best bet is to eat a mix and choose wisely based on your needs. Some tips: